Academic writers frequently need to cite articles in various types of serial publications: journals organized by volume, each of which contains multiple issues that are paginated consecutively (see SBLHS 6.3.1–2); magazines that are arranged by volume and issue but not consecutively paginated across issues (see 6.3.9 and here); journals organized by issue only or by a combination of volume and consecutively numbered issue. This post discusses the preferred citation of the latter group.

Although it is most common for academic journals to be arranged by volume and a specified number of consecutively paginated issues within each volume (e.g., JBL), some journals adopt a different approach: publishing each issue as a separately numbered entity (sometimes even designating each issue a separate volume).

For example, the Journal for the Study of the Old Testament was launched in 1976 with the publication of issues 1–3 and continued with issue 4 in 1977, issues 5–9 in 1978, and so on. JSOT followed this numeration through issue 99 (the Book List issue in mid-2002), then switched to the more traditional arrangement by volume and consecutively paginated issues. One should note, however, that JSOT counted each of its publication years as a volume, so that the shift to the traditional arrangement began with volume 27. Also worth mentioning is that the shift took place in the middle of the year, which resulted in a volume spanning two years. This continues even today.

How, then, should one cite an article from the first ninety-nine issues, as opposed to an article published after the change? Several examples formatted in the traditional note style will help make this clear.

Note in the first set of examples that one cites the issue number where one would typically list the volume, since the issue in this case serves the same function as a volume number. The month or season of the issue should not be identified; the combination of issue, year, and pages is all that a reader needs to locate the article.

The second set of examples follows the usual citation style (see SLBHS 6.3.1). Note, however, that both years of volume 30 are listed; the principle to keep in mind is that one should cite the years of the entire volume, not the publication year of the individual article.

The same citation principles apply for the Journal for the Study of the New Testament, which published issues 1–86 in 1978 through mid-2002, then switched to the more traditional format with volume 25 (2002­–2003).

The journal Revue de Qumran presents yet another variation: it identifies issues both by individual number and by volume with consecutively paginated issues. As the cover to the right shows, the first issue of volume 2 (November 1959) is at the same time i 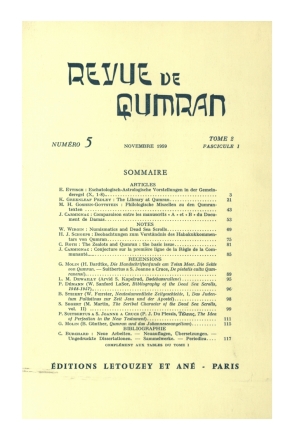 ssue 5 in RevQ’s entire publication history. The same practice continues today; for example, the second issue published in 2017 is both issue 110 overall and the second issue of volume 29. Note that from the beginning pages have been numbered consecutively within each volume.

When citing an article from RevQ, one should ignore the running issue number and use the traditional journal article citation format, as in the following:

The primary consideration for any citation, whether the material being cited follows a standard pattern or is nonstandard in some way, is to provide clear and adequate information so that a reader can locate the source being cited. The guidelines offered above, we believe, accomplish that for journals that deviate from the traditional volume-issue format.

One thought on “Journals Identified by Issue Number”

The SBL Handbook of Style has been thoroughly updated to reflect the latest practices among scholars, editors, and publishers as well as to take into account current trends in scholarly publishing. This supplementary site highlights changes from the second edition and notes corrections and additions that will be included in the third edition. Unless otherwise indicated, all references to the SBL Handbook of Style (SBLHS) on this site are to the second edition.
Please send questions and comments about the SBLHS to SBL Staff.
Order your copy.
Follow @SBLPress

This work is licensed under a Creative Commons Attribution-NonCommercial-NoDerivatives 4.0 International License.